q: what are you doing

a: counting the spaces

a: waking up with you. waking up with the dent of you. going online at 3am and finding you still glowing. the milk cannot be touching anything else. it won't work. would you like to be face to face and not in cyberspace?

q: when i open my mouth you

a: turn down the music. the phone is always an unknown caller. the milk cannot touch the place "from whence it came." we were in the christmas aisle, casually, and then i woke up hollering. i wasn't crying, it was nighttime everything was blue that is why water gives that appearance.

q: christmas is not good because

a: you shouldn't drink coffee at night because you will wake up with your mouth open and sometimes a sound will be coming out and you won't know it as your own until you realize the tv is not on and the alarm is not set.

q: and the phone is not ringing

a: she told her best friend. she said, my husband is in the mob. simple. then he shot her dead. it was me that time, he shot me dead. i was wearing his jacket when three bullets came through it. then i put the gun to my head. i said i love you i promise don't kill me.

q: so then you got up and went to work

a: my head is in different spaces. right now it is on the train traveling southbound. southeast, if you want to know exactly. everything that's lovely gives off light. her mouth in space at 3am, a moonrise.
Posted by Kathryn at 10:55 PM 4 comments:

we thought something terrible had happened.

we thought the awful smell was coming from the cabinets
or that the nation was under attack because the couch had changed colors.

he said i’d like to introduce you to this person i won’t admit to knowing. say pleased to meet you.

he said i’m sorry, i don’t know anyone by that name.

she said i love to remember these beautiful remembering things.
i think she hasn’t learned the word memories.

she said i think something died at wabash and adams. everyone in their cars rolled up their windows and all the people on the street put their hands to their faces. i said do you think it was important?
she said it was close to the library.

in my old town there were plenty of cemeteries to wander around in but in this town there’s just street.
miller’s pub has a new flashing sign, have you seen it?

he said i don’t know what you mean by that.

what i mean is that i thought something terrible had happened but really the terrible thing had already happened and what i was doing was remembering.
Posted by Kathryn at 10:03 PM 4 comments:

As I Said is over

I am not going to post any more of As I Said. I will post other things now.
Posted by Kathryn at 9:45 PM No comments: What if there were two of me and only one of you
What if one of me was at the bottom of the ocean and the other
stood at the shore looking at the water
What if you wanted me but did not know
that I am really under water, way down under loads of waves
and whales and starfish, hiding in a clam, a pearl in my mouth
What if I told you that you must speak my other name
What if the other you was a thousand miles away
in a hot desert buried under quicksand filling your mouth and eyes
What could either of us say with all of that weight on top of us
so far below the surface of the earth
Posted by Kathryn at 9:46 PM 2 comments: 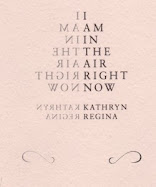